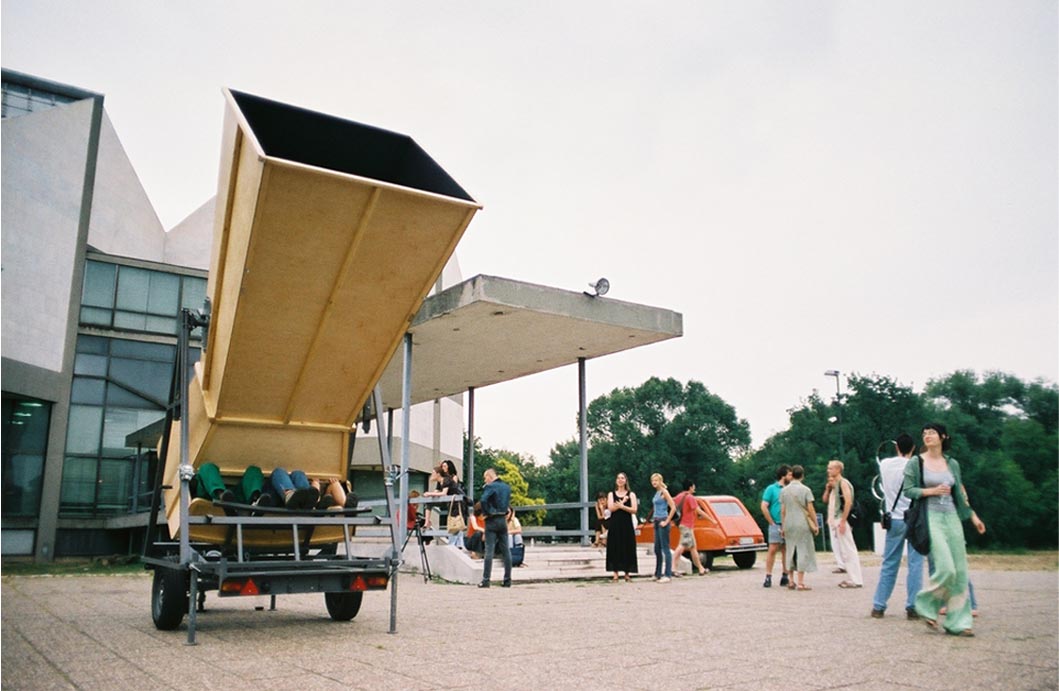 Introduction:
A trip to Scandinavia which Rob Sweere undertook last summer marked the origin of the plan to make a work that would convey the experience of light to the viewer. The journey sharpened his awareness of the influence of daylight. The ’substance’ of the light in the northern reaches impressed him profoundly. He was moreover fascinated by the psychological effect of daylight on people, which became apparent in Sweere’s conversations with local inhabitants.

In the ‘Travelling Light’ project, we conceived the idea of having light itself – an important theme and inspiration for the artist – travel. For this purpose, we developed a mobile instrument, i.e. one which would be transportable to various locations. The instrument is a means for inviting spectators to participate in an action where they – literally and figuratively – zoom in on the skies and daylight of their own environment and of the environments in other places and contexts. The events, experiences and sensations engendered by the project will be compiled and transformed into a book and a videotape.

Plan:
The instrument and the action:
For the purposes of the Travelling Light project, an instrument – the Lightcatcher – was built to capture and transport light. Spectators are invited to experience light by means of this instrument. They enter into the interior of the instrument, which is a shaft in the form of a truncated pyramid mounted on wheels. A square opening reveals a fragment of the local landscape. The object is then tilted slowly upwards, with the result that the horizon shifts and eventually disappears from the field of view so that only a patch of sky remains visible through the square opening.

This ‘experiential object’ is equipped with a video camera, which is mounted behind the occupants. The video recording registers both the view seen by the persons in the Lightcatcher and their reactions during the ‘performance’. Furthermore, spectators are confronted with similar images previously recorded at a different location. These images are projected on a screen or a wall in the vicinity of the Lightcatcher. Thus spectators are invited firstly to focus on their surroundings by the outlook from inside the Lightcatcher – the light and skies of their own locality. Secondly, spectators are confronted with an image of the surroundings, light and skies of a different locality, and with the reactions of those who underwent this experience at the time of recording.

The travels:
The Lightcatcher is to be installed at various destinations on the basis of certain criteria. The physical (and mental) point of departure is our own surroundings and our own culture. In selecting other destinations, aspects such as the following will be taken into account: distance and compass direction, and a variety of social and cultural contexts. We intend to visit five different destinations for the Travelling Light project. The journeys will take place in 2003 and 2004. The starting point is to be Rotterdam and a place outside the centre of Rotterdam (March 2003). Other destinations under consideration are Finland, England or Scotland, Yugoslavia, Israel or Spain.

At each destination, an institute (a museum or other cultural platform for art) will be sought to participate in the project as a partner. The participating institutes will play a substantive part in the realization of the project by helping to choose the actual locations for erecting the Lightcatcher and the time at which the presentation will take place. Two locations will be chosen at each destination. Firstly, a location will be sought at or near a well known cultural site in the region (e.g. the building of the institute concerned). Secondly, the institute will help select a location outside the city or cultural site, e.g. a market place in a nearby village or a place in the countryside. An crucial aspect is that a concrete gathering of people will take place, both at the cultural site and at the residential/rural location, at the moment of the action. In the cultural context that could, for example, be the opening of an exhibition. At the out-of-town location, a suitable occasion might be market day on a village square.

We will travel with the Lightcatcher to the agreed destinations in the respective countries. The first presentation at each destination will be held at the designated location in the community outside the art world. We will then travel to the city, where the Lightcatcher will be installed at the agreed location in the vicinity of the exhibition building of the partner installation. If necessary the order could be reversed.

The presentation surrounding the Lightcatcher will be in two parts. Firstly, there will be the object itself, which spectators (maximum 3 people at once) can enter in order to experience the outlook from the interior. Secondly, a videotape of the previous locations will be projected in the vicinity of the Lightcatcher. The spectators will consequently have the opportunity to view both their ‘own’ skies and those of some other place in the world. Each will thus be confronted with his own experience, and will also experience the expression of someone else’s experience in the latter’s surroundings elsewhere (a different view, a different language, different behaviours, different cultures).

Book and videotape:
The Travelling Light project will result in a book and a videotape.
The book will be realized during the journeys to foreign destinations. It will describe, explain and illustrate both the events of the journeys and those of the presentation (the action) at the foreign destinations. For the descriptions of the events, cooperation will be requested of the local institutes involved, in the form of interviews and/or texts written by them.
The video recordings will be used to produce a documentary film of the total project, presenting the aim of the project and the experience of those involved (the originators, the institutions and spectators).

Partner for Travelling Light in Rotterdam is Anton Hoeksema, exhibition and education staff member of the organisation ‘TENT’. Anton Hoeksema proposed the weekly market event at the ‘Grote Visserijplein’ as rural/social location, in contrast to the manifestations at the ‘Schouwburgplein; central point of the Mosaiquefestival. (The ‘Mozaiquefestival’ is a well known yearly, two-day music festival in the centre of Rotterdam.) Hoeksema knows the vicinity of the Visserijplein since his youth. The place has a special historical sense, as it was bombed in the Second World War. A little park across the square commemorates that moment. Every week there is a big multicultural market at the square in front of the park. On Thursday, March 13th, the Lightcacher was installed there. On March 28 and 29, the video images of the action at the Visserijplein will be shown at the Schouwburgplein on a videowall, in the vicinity of the Lightcatcher which will be installed there at that moment.